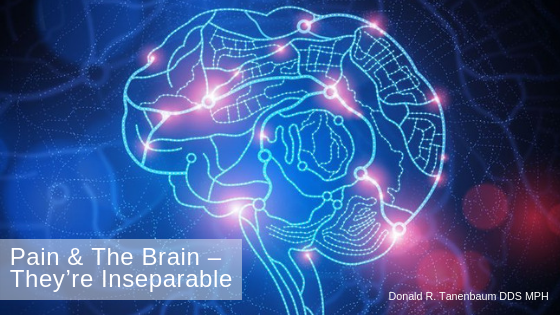 As a doctor whose focus is on people who suffer from facial pain and the pain symptoms associated with Temporomandibular Disorders (commonly referred to as TMJ), I think about pain, a lot.

A great deal of new scientific knowledge has been gained in my field in the past several years. Being familiar with this knowledge is an essential part of how I make difficult decisions about my patients’ pain problems. However, taking advantage of this knowledge is only part of it. My years of experience and knowledge of the right questions to ask are what enables me to figure out the “why” of a patient’s pain problem.

Robin, a 43-year old woman, came to my office because she was experiencing tooth and jaw pain that seemed to have come from nowhere. She had always taken good care of her teeth at home and visited her dentist twice a year for routine cleanings and monitoring.

Robin was experiencing pain – and it was getting worse. She had already been to her dentist. Her dentist sent her to see a root canal specialist. Neither professional was able to detect anything to explain her pain, and, as a result, no treatment was rendered. Yet, her pain was getting worse.

When I first met her, Robin was using over-the-counter pain medication and avoided chewing on the painful side of her mouth. Her jaw felt stiff and tight. At times it felt like her jaw muscles were cramping. The simple acts of smiling and talking prompted her pain to flare. She was not yet miserable but was clearly heading in that direction.

Sometimes Robin’s pain would vanish for hours but then return with a vengeance. There was no discernible pattern.

Before I proceed, it’s essential for you to understand a few facts about pain. Contrary to what you may think…

Pain & The Brain – Back To Robin

After an examination, it was clear to me (despite Robin’s high level of suffering) that no clear-cut physical findings existed to tie her pain to a specific tooth or jaw joint/muscle compromise. Sore jaw and neck muscles were the only recognizable finding.

Robin’s level of suffering appeared to be more profound than were my physical findings.

Pain & The Brain – The Right Questions To Ask

At his point, I asked Robin some very specific questions designed to identify the presence of any risk factors that could potentially be impacting her pain thresholds, and causing her jaw and neck muscle discomfort.

As I gathered her medical history, I was not surprised to find out that Robin experienced long-standing sleep deprivation and chronic, painful gastrointestinal problems. And that she was taking care of her aging mother and had a job, which required her attention 24/7.

When I put it all together, it was clear that Robin lived in a state of emotional distress. Essentially, she was ready for battle on an ongoing basis. Next, I looked at her for other clues and found them: raised shoulders, crossed arms, shallow quick breathing, and an acquired behavior of keeping her jaw muscles braced, usually with her teeth clenched, as well.

Essentially the parts of her nervous system that are responsible for maintaining normal pain thresholds and allowing the brain to interpret incoming nerve transmissions correctly were failing. This led to what is called a state of sensitization. In this state, normal life activities, such as opening your mouth, eating, smiling, and talking can lead to pain – even in the absence of apparent tissue injury.

Pain Is In Your Head


I carefully explained to Robin why her pain had developed at the same time validated that the pain was real. Many people in Robin’s situation have been told, “your pain is all in your head.”

But not the way they mean it.

I then outlined what I refer to as the “60/40 rule of care”. I was going to direct 40% of her treatment, which included physical therapy, muscle injections, and medication. She was going to be responsible for the other 60%. She was to do 20 minutes of physical exercise every other day, make an effort to get more sleep, and begin to pay attention to her diet to avoid heightened gastric distress.

Robin also agreed to address issues at her job, and most importantly, to pay attention to changing her stressful breathing patterns and postures driven and shaped by her challenging life.

Although Robin cannot escape all of the risk factors of her life, she is now able to change the way her body and her breathing reacts to them.

Like many patients with her type of pain scenario, she has responded well to the strategies we put into place. She acknowledges that her participation in the process has been critical.

Today, when flare-ups occur, Robin now understands in those moments her brain is not her friend. And she is learning how to change her brain’s opinion – quickly.

Pain issues and sleep challenges do not have to be lifetime afflictions. You need someone who listens and possesses the knowledge and compassion to get your pain and sleep problems under control.

I am that someone – and you’re in the right place.
Dr. Donald Tanenbaum, DDS MPH