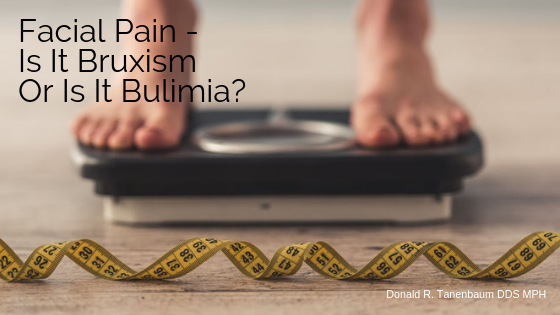 As a TMJ doctor, every year I see a number of patients who are suffering from an extraordinarily high level of face and jaw pain. At first glance, the level of suffering they report is much greater than what I commonly see. One such group are people with a history of one particular eating disorder – bulimia nervosa.

In these patients, the typical characteristics I see in people with TMJ are not present. Although their symptoms may lead them to believe that their pain is driven by stress-related jaw tension and bruxism (teeth grinding and clenching), the telltale signs are simply not there. That’s when I ask myself, is it bruxism or is it bulimia?

Is It Bruxism or Bulimia? A Case Study

Marci was 26 when she arrived at my office some three years ago. For several years she’d been dealing with debilitating jaw and face pain almost daily. The pain was centered at the angles of her jaw on both sides and it had become, as she described it, “unmanageable.”

Pain was ruining her life.

Many doctors and therapists had tried to help Marci find relief. She’d been prescribed pain medications and muscle relaxers. She’d been treated by physical therapists. She had acupuncture and trigger point injections. She even tried wearing an oral appliance to bed, thinking her problems were the result of bruxism.

Frustrated and discouraged, Marci was still suffering – with no resolution in sight.

4 Clues That Bruxism Was Not The Culprit

At first, Marci didn’t share her entire medical history with me. Possibly because she was embarrassed or simply didn’t think there was a connection. However, even without knowing her full history, several clues pointed to the fact that Marci’s pain was not caused by bruxism, but instead was a result of bulimia:

So, Why Did I Suspect Bulimia?

In order to answer the question, is it bruxism or is it bulimia, each clue pointed to the answer. You see, bulimia can wreak havoc in the mouth because frequent vomiting exposes the teeth to acid, which can dissolve their protective enamel. This is seen on the back of the upper front teeth and in the center of the lower back teeth where regurgitated acid can pool. And, over time, frequent vomiting can cause the parotid gland (the largest salivary gland) to become inflamed and enlarged, resulting in acute nerve pain in the overlying jaw muscles and prompting facial puffiness.

Probing deeper into Marci’s medical history, I concluded that it was indeed bulimia, not bruxism that was the cause of Marci’s pain. Now it was time to offer a plan of treatment. I prescribed the medication nortriptyline (a once-popular antidepressant) that, when used in small doses has been shown to be effective in reducing pain in muscles by quieting nerve excitation. It is thought to work over time by increasing the activity of serotonin in the brain, according to the Mayo Clinic.

Marci also had a series of Botox injections in her masseter muscles at my office, designed to not only reduce muscle tension but to also diminish the release of nerve-irritating chemicals. (See Botox Injections For TMJ – 6 Things You Need To Know)

She was also given a custom-made topical salve containing a mixture of anesthetic, nerve membrane stabilizers, and anti-inflammatory medications to rub over the sore areas of her jaw three times a day.

A Much Happier Existence

Four weeks into treatment, Marci reported that her pain was more than 40% reduced. A second series of Botox injections months later provided even better results. With her pain reduced, she was more motivated than ever to continue talk therapy, which she had started in an attempt to get a handle on her bulimia.

Today, Marci comes into my office every 4-6 months for a refill of her nortriptyline prescription and occasional Botox injections. She’s nearly pain-free, almost bulimia free, and she leads a much happier existence.

Do You Know Someone Who Has Bulimia?

If you or someone you care about has bulimia and is suffering from facial and /or jaw pain, it is quite possible that a relationship exists. It’s very important to answer the question, is it bruxism or is it bulimia, so the right treatment can be put into place.

Although strategies like those used in Marci’s case won’t provide a cure, they can go a long way towards improving the quality of a suffering person’s life.

Advanced training and over 35 years of experience makes Dr. Donald Tanenbaum uniquely qualified to diagnose and treat jaw and facial pain problems. He has helped countless patients finally get on the road to recovery. Relief Lives Here.